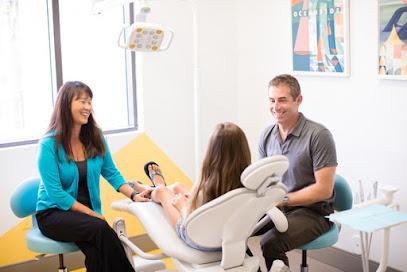 Dr. Chris earned a Bachelor of Science from Creighton University in Omaha, NE, and upon graduation he immediately moved back to Southern California where he worked as a Molecular Biologist in La Jolla, California. It was during this period that he met and married his wife Laurian, an Architect.

Deciding to switch careers, Dr. Chris moved with Laurian to New York City where he earned his dental degree from New York University College of Dentistry. Following four years in NYC, and the birth of their daughter Adina, the family moved to Albuquerque, New Mexico where Dr. Chris completed a residency in Advanced General Dentistry at the University of New Mexico. Upon graduation, Dr. Chris was named the Chief Dental Officer at Albuquerque Healthcare for the Homeless. It was during these years working with a wide variety of patients that Dr. Chris recognized his passion for working with children. In early 2011, and in recognition of his commitment to providing exceptional care in a public health setting, Dr. Chris was named by the New Mexico Primary Care Association as the New Mexico Public Health Dentist of the Year.